The special counsel needs to rise above his Comey loyalties.

The Wall Street Journal Editorial Board 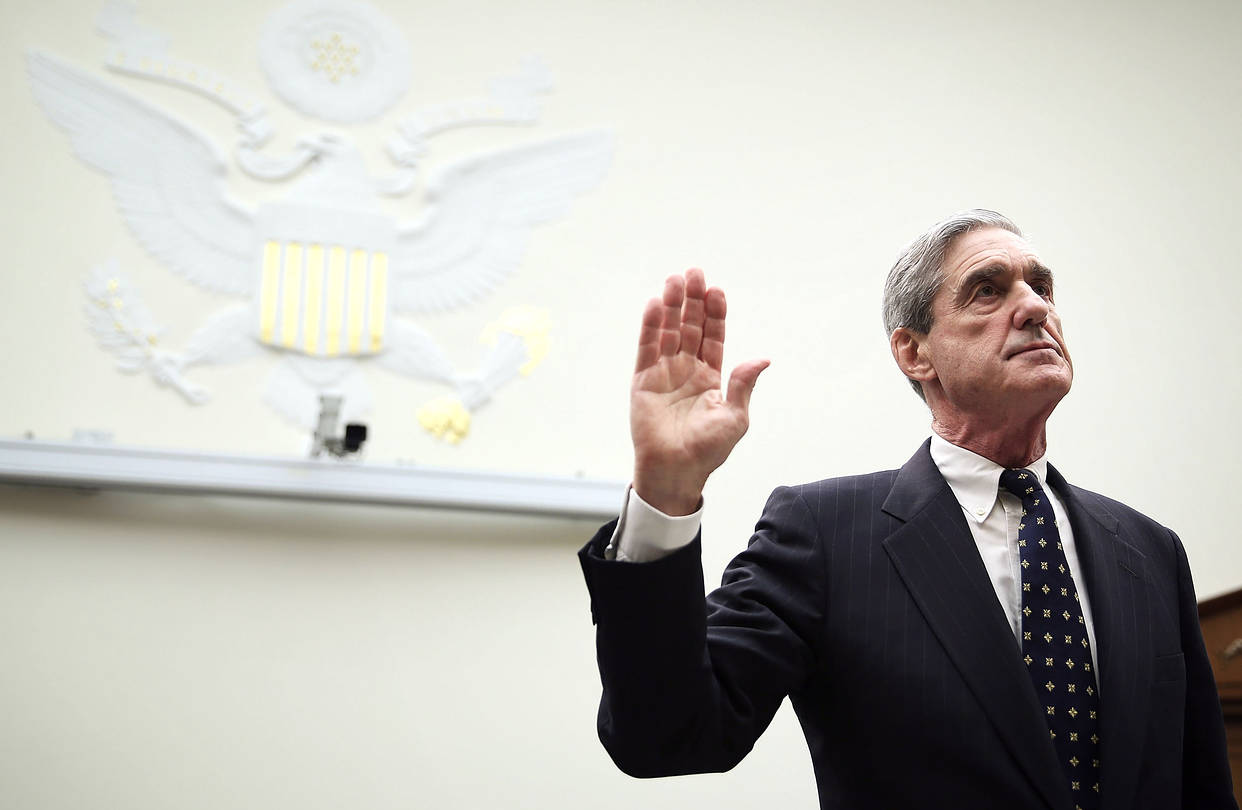 FBI Director Robert Mueller is sworn in during a hearing before the House Judiciary Committee on June 13, 2013 on Capitol Hill. Photo: Getty Images

That didn’t take long. Barely a week after James Comey admitted leaking a memo to tee up a special counsel against Donald Trump, multiple news reports based on leaks confirm that special counsel Robert Mueller is investigating the President for obstruction of justice. You don’t have to be a Trump partisan to have concerns about where all of this headed.

President Trump has reportedly stepped back this week from his temptation to fire Mr. Mueller, and that’s the right decision. The chief executive has the constitutional power to fire a special counsel through the chain of command at the Justice Department, but doing so would be a political debacle by suggesting he has something to hide.

Deputy Attorney General Rod Rosenstein, who appointed Mr. Mueller, would surely resign, and other officials might resign as well until someone at Justice fulfilled Mr. Trump’s orders. The President’s opponents would think it’s Christmas. The dismissal would put the President’s political allies in a terrible spot and further distract from what are make-or-break months for his agenda on Capitol Hill. His tweets attacking the probe are also counterproductive, but by now we know he won’t stop.

There are nonetheless good reasons to raise questions about Mr. Mueller’s investigation, and those concerns are growing as we learn more about his close ties to Mr. Comey, some of his previous behavior, and the people he has hired for his special counsel staff. The country needs a fair investigation of the facts, not a vendetta to take down Mr. Trump or vindicate the tribe of career prosecutors and FBI agents to which Messrs. Mueller and Comey belong.

Start with the fact that Mr. Comey told the Senate last week that he asked a buddy to leak his memo about Mr. Trump specifically “because I thought that might prompt the appointment of a special counsel.” Did Mr. Comey then suggest Mr. Mueller’s name to Mr. Rosenstein? He certainly praised Mr. Mueller to the skies at his Senate hearing.

Less well known is how Mr. Mueller resisted direction from the White House in 2006 after he sent agents with a warrant to search then Democratic Rep. William Jefferson’s congressional office on a Saturday night without seeking legislative-branch permission. The unprecedented raid failed to distinguish between documents relevant to corruption and those that were part of legislative deliberation. GOP Speaker Dennis Hastert rightly objected to this as an executive violation of the separation of powers and took his concerns to Mr. Bush.

The President asked his chief of staff, Joshua Bolten, to ask Mr. Mueller to return the Jefferson documents that he could seek again through regular channels, but the FBI chief refused. Attorney General Alberto Gonzales was also unable to move the FBI director. When Mr. Bolten asked again, Mr. Mueller said he wouldn’t tolerate political interference in a criminal probe, as if the Republican Mr. Bush was trying to protect a corrupt Democrat. Mr. Mueller threatened to resign, and the dispute was settled only after Mr. Bush ordered the seized documents sealed for 45 days until Congress and Mr. Mueller could work out a compromise.

The D.C. Circuit Court of Appeals later ruled that the FBI raid had violated the Constitution’s Speech or Debate Clause and Mr. Jefferson’s “non-disclosure privilege” as a Member of Congress, though the court let Justice keep the documents citing Supreme Court precedent on the exclusionary rule for collecting evidence.

We relate all this because it shows how Mr. Mueller let his prosecutorial willfulness interfere with proper constitutional and executive-branch procedure. This showed bad judgment. He shares this habit with Mr. Comey.

Meanwhile, Mr. Mueller’s staff appointments suggest that he is preparing for a long prosecutorial campaign. One unusual choice is Michael Dreeben, a highly regarded Deputy Solicitor General whose expertise is criminal law and the Constitution. He is not a prosecutor or counter-intelligence expert. Is Mr. Dreeben on hand to make a legal case for impeachment?

The special counsel has also recruited Andrew Weissmann, who oversaw the Enron Task Force and led the prosecution of the Arthur Andersen accounting firm. The Supreme Court unanimously overturned Andersen’s conviction, though too late for Andersen’s 28,000 U.S. employees.

Mr. Weissmann has donated to Hillary Clinton’s political campaign, but more relevant for this case he was highly criticized for his legal conduct over the years by the New York Observer newspaper. “In Andrew Weissmann, The DOJ Makes a Stunningly Bad Choice for Crucial Role,” said one headline in January 2015. The owner of the Observer at the time? Jared Kushner, President Trump’s son in law and now a White House aide.

With that history, can Mr. Weissmann fairly judge the actions of the Trump family and campaign? And knowing that history, why would Mr. Mueller choose Mr. Weissmann for his prosecutorial team when the appearance of fairness is crucial to public acceptance of the result?

As it happens, the Washington Post reported in its second big story this week that Mr. Mueller “is investigating the finances and business dealings of Jared Kushner.” A fair question is whether Mr. Weissmann is another Patrick Fitzgerald who won’t stop until he nails someone in this probe.

Mr. Mueller is widely admired and no one questions his personal integrity, but we raise these issues because the stakes for American democracy are so high. As we’ve said from the beginning, Russian meddling in U.S. elections is a serious matter and Americans need to know what happened. If Mr. Trump or key associates canoodled with the Russians to steal an election, then he must face the likely consequence of impeachment.

But the public has seen no such evidence, and the FBI has been looking for months. Instead we have leaks that the special counsel whose friend was fired by Donald Trump is focusing on obstruction of an investigation into an underlying crime that so far doesn’t exist. In Watergate at least there was a third-rate burglary.

Much of Washington clearly views Mr. Mueller as their agent to rid the country of a President they despise. Every political and social incentive in that city will press Mr. Mueller to oblige. But you cannot topple a duly elected President based merely on innuendo or partisan distaste without doing great harm to democracy.

Richard Nixon’s road to resignation was painful but the facts were clear enough at the end that most Americans accepted the result. The country deserves no less concerning Donald Trump, no matter his character flaws. Mr. Mueller and his team of zealous prosecutors have a duty to bring a case based only on solid and conclusive evidence. Otherwise close the case with dispatch and move on.

American politics is divisive and dysfunctional as it is. Imagine what it will be like if millions of Americans conclude that a presidential election is being overturned by an elite consensus across the vast ideological and cultural divide running all the way from the New York Times to the Washington Post.