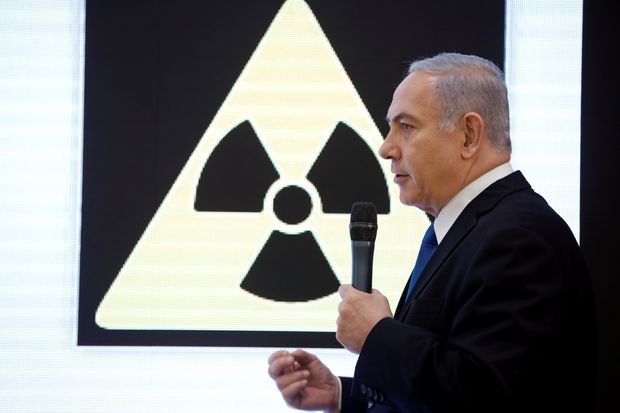 In a presentation on national TV, Mr. Netanyahu revealed the country’s spooks had obtained “half a ton” of documents and CDs from a secret facility in the Shorabad District in southern Tehran. The Israeli leader claims the files “conclusively prove” that Iran lied about its nuclear-weapons program before signing Barack Obama’s 2015 nuclear pact, and that it has since worked to preserve its nuclear-weapons related capabilities.

Mr. Netanyahu offered photographs, videos, charts and blueprints from the intelligence haul relating to Tehran’s Project Amad, which the Israeli leader called “a comprehensive program to design, build and test nuclear weapons.” The Iranians have always denied the existence of such a program, and the United Nations downplayed Tehran’s nuclear ambitions in 2015.

It’s no coincidence that Iranian Foreign Minister Javad Zarif mentioned that 2015 U.N. assessment in a tweet Monday as evidence that Tehran should be trusted. Perhaps the U.N.’s International Atomic Energy Agency inspectors would like to revisit those findings in light of this new evidence?

Mr. Netanyahu also claimed that the underground Fordow uranium enrichment facility was designed “from the get-go for nuclear weapons as part of Project Amad,” and misled the U.N. about its activities. The Iranians preserved Project Amad’s documentation and have kept its research team, headed by Mohsen Fakhrizadeh, largely in place in a new organization housed within the Defense Ministry.

The Israelis have shared this information with the U.S., and Trump Administration officials said Monday it seems authentic. Mr. Trump has said he’ll decide by May 12 whether to withdraw from Mr. Obama’s Iran nuclear deal, and the Israeli intelligence findings are surely relevant. If Tehran is waiting until the deal sunsets starting in 2025 to rev up its reactors, then the evidence tilts toward withdrawal unless the deal can be reworked to make it permanent.

Meantime, Israel is taking action against Iran’s increasing military buildup in Syria near the Golan Heights. On Sunday Syria’s state news agency reported missile strikes hit military bases in Aleppo and Hama, destroying an arms depot and killing more than 20 fighters. Some of the dead were reported to be Iranians, though Iran denied it. Israel has a policy of not commenting on such strikes, but the force and accuracy of the strike could only have come from a state power like Israel. As long as both sides pretend not to be doing what they’re doing, they have an easier time avoiding escalation.

The intrigue was magnified by Mike Pompeo’s swing through Israel and other U.S. Middle East allies on his first trip as Secretary of State. One of his goals is to build a new alliance against Iranian aggression in the region. On Sunday he said that Iran is “the greatest sponsor of terrorism in the world, and we are determined to make sure it never possesses a nuclear weapon,” adding that “the Iran deal in its current form does not provide that assurance.”

The issues are linked because Iran has used the windfall from the nuclear deal to fund its regional aggression. The sooner the world pushes back against Iranian imperialism, the better the chance of avoiding a much larger war.

To subscribe to Israel Commentary:  Send your email address to